Reading time is 11 min
no time to read?

We’re so used to some popular translator apps that we don’t even think to search for others. However, some of them are outdated and don’t provide accurate translations. Moreover, you may need a separate app for each particular task.

We’ve compiled a list of good translation apps, from voice-to-voice translations to menu localization apps for Asian restaurants. Read on to learn more about the apps you can start using today to improve your language skills and simplify daily tasks.

Translate All: a product for translating texts, audio, and images that will delight you with its versatility.

TripLingo: a travel tool for those who want to communicate with the locals without language barriers.

TextGrabber: recognizes text in an image and quickly translates it.

WayGo: translates texts of menus in Asian and some other languages.

Papago: a handy app that helps people find a common language with a foreigner.

Translate On Screen: works in the background to translate texts on your screen.

SayHi: translates text and audio just as well as the IT industry leaders.

iTranslate: translates your real-time conversation with a native speaker of another language.

We’ve researched and explored dozens of translation apps. We paid attention to various aspects: the interface convenience, the number of languages, the main functions, the overall goal, and others. We’re now ready to share a list of good translation apps that will help you solve various issues.

This app may indeed seem outdated. The interface loses to modern products from Google or Apple. However, its datedness may be an advantage because the ease of use makes the app accessible to different user groups. Microsoft Translator provides modern features such as audio and photo translation. There’s also a phrasebook, history, the ability to change the audio speed, and other helpful tools that will help you work, travel, or improve your learning experience. An offline mode will help you out even if you are traveling without an internet connection on your mobile phone.

The most widely used app 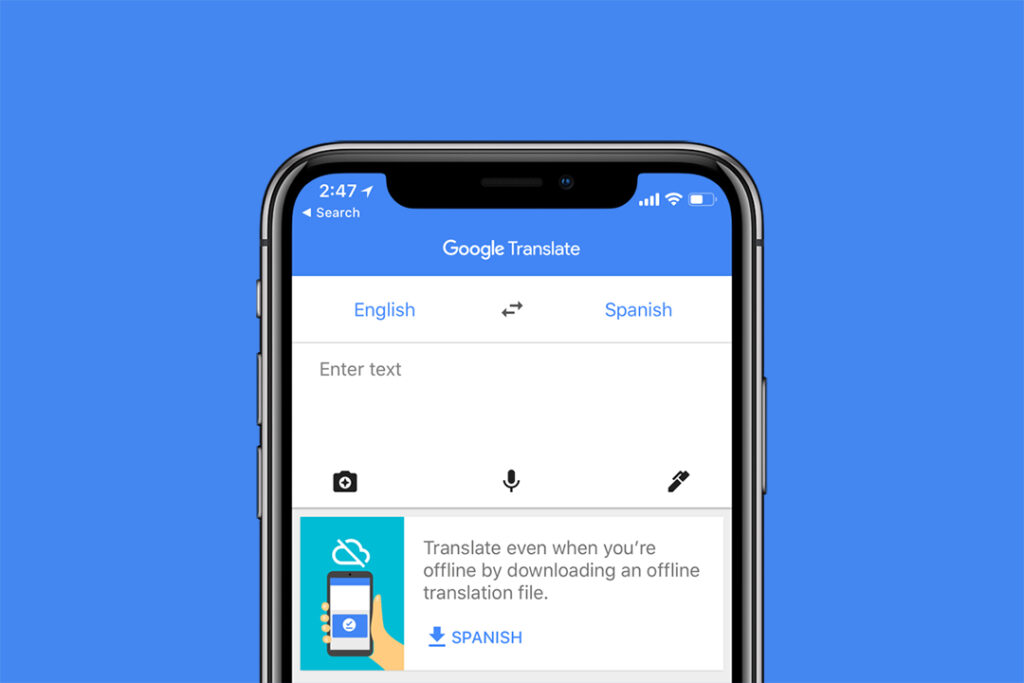 Google Translate is one of the most widely used translation apps in the world. It’s no secret that it was developed by Google, one of the largest IT corporations in the world. As a consequence, the app is based on the latest developments in the area of artificial intelligence, which improves the translation quality. The interface on both Android and iOS devices is quite simple and familiar to many since the beginning of the century, and the huge amount of rare and popular languages makes the app quite versatile.

An app for various translation formats 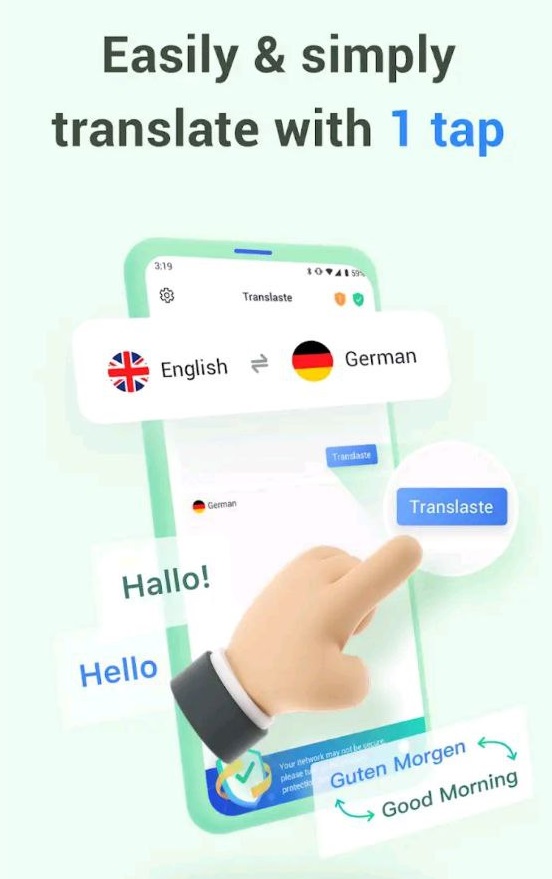 A distinctive feature of this app is that it works with different formats: text, speech, and images. No matter what form of the content you need to translate, the app will cope with it. It supports multiple languages and works on iOS and Android phones, making it a great companion for work or travel. 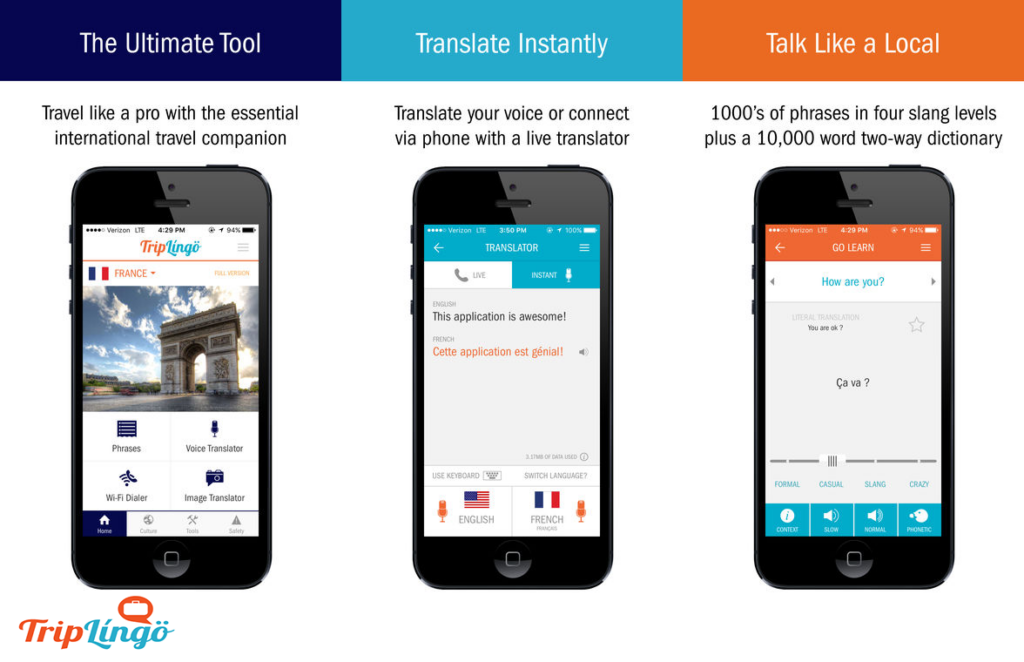 This app will be useful to help language learners feel less stressed in a foreign language environment. It will help you pursue learning a new language, including local slang and the basic conversation vocabulary. The voice translator will allow you to communicate with foreigners in real-time, and a currency converter will save you from using a calculator whenever you visit a cafe. Practical learning tools such as quizzes and flashcards will help you quickly study simple phrases and start speaking.

Pros: many features, including security tips 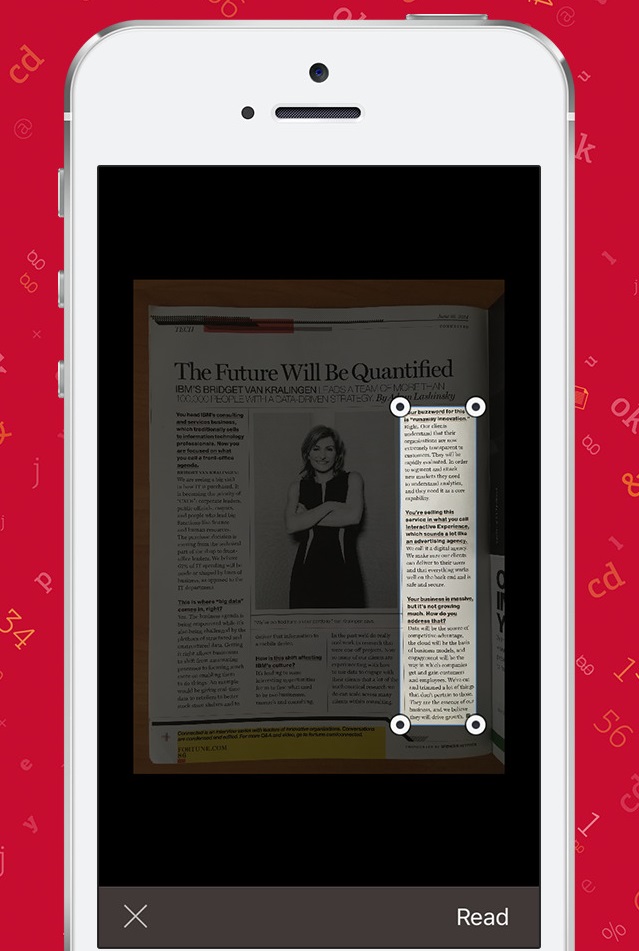 If you need to read a menu in a restaurant in a local language or a foreign article, you might start translating each word individually. TextGrabber will save you time – you can just use your phone camera for the app to translate the text immediately. This functionality simplifies travel, work, and other language-related tasks.

Order only the dishes you want 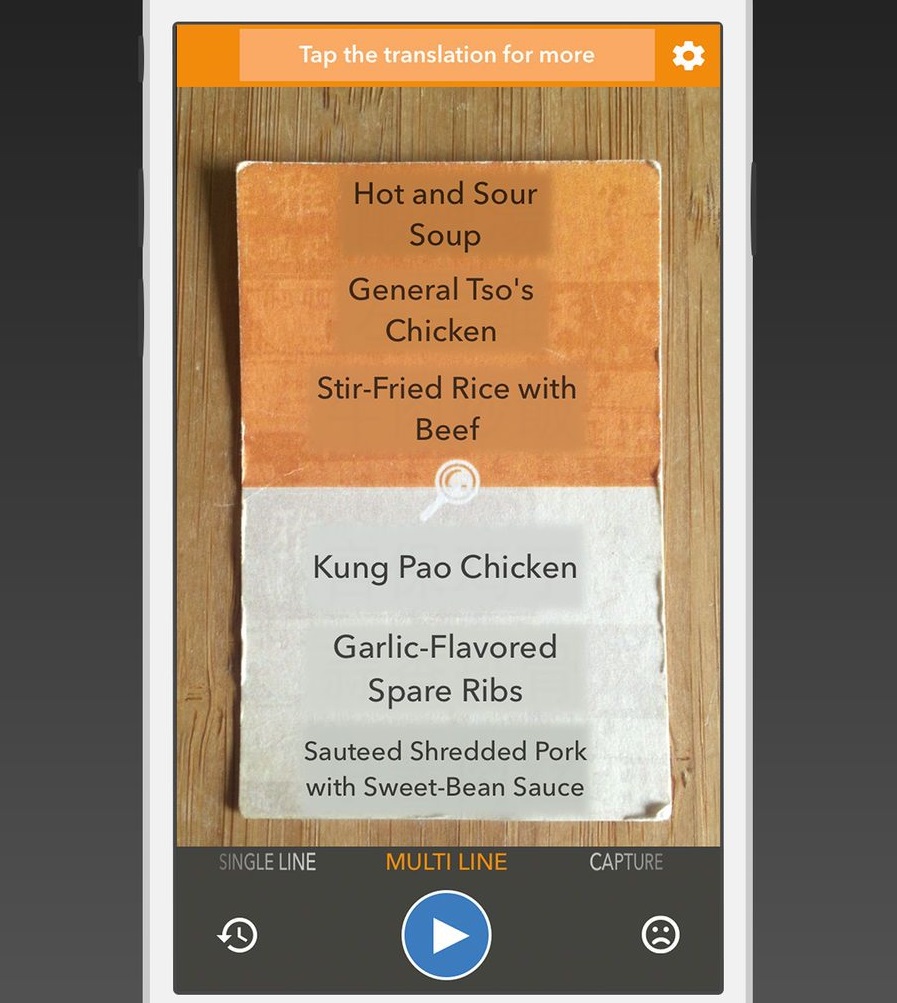 WayGo is another app that will help you translate a menu. It translates texts from images in Asian languages, including Chinese, Japanese, and Korean, into English. It will be a great companion for your travels in Asia. 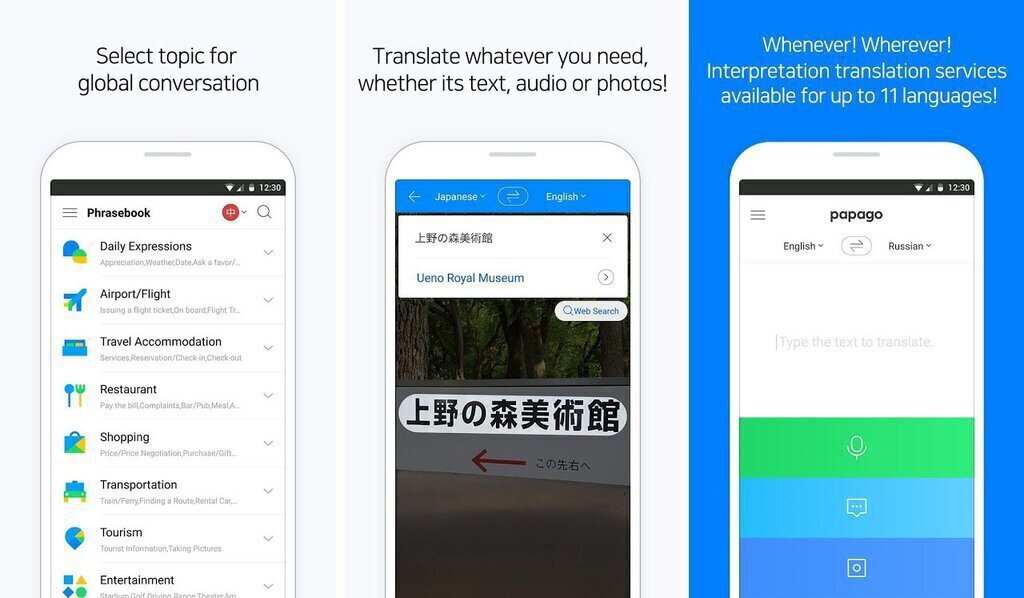 The app supports only a few languages since it mainly specializes in Asian ones, but it also translates English and French, for example. It supports text and voice translation and will help you organize a full-fledged conversation between speakers of two different languages. There’s a convenient web version in addition to the app since it works only on Android devices.

Translates text directly from the screen

The app automatically translates everything that appears on your screen. There are more than 100 different languages in the database, so you can surf the Internet without worrying that you won’t understand something on a foreign website. In addition to text, it also allows you to translate audio and images from the camera of your mobile device.

Cons: the translation is not always accurate 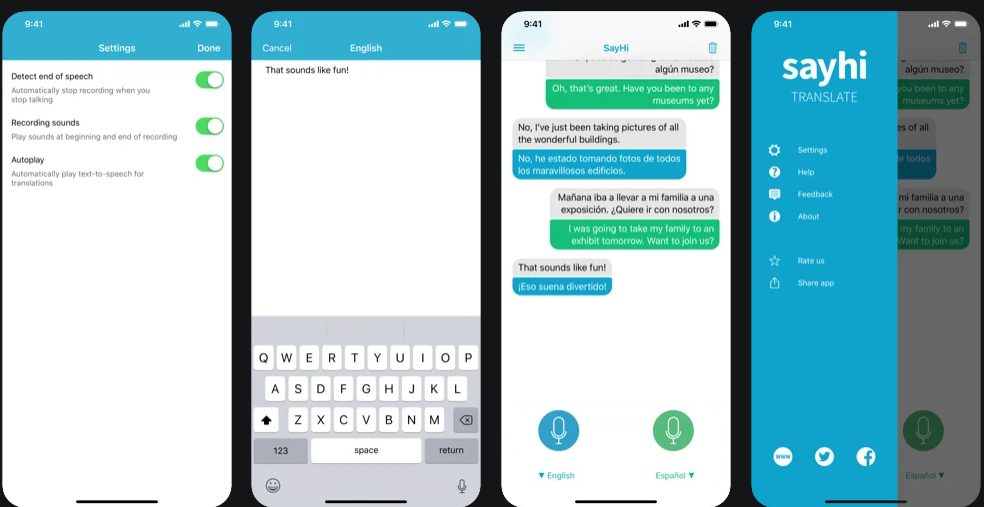 SayHi is not as popular as apps built by industry leaders. Nevertheless, it’s constantly developing and, more importantly, offers good translations. On the main screen, you will see a white background and two mic buttons on different sides for translation into a foreign language and vice versa. Instant voice translation is one of the main useful features of the app. However, this focus has affected the overall quality of the translation, so the accuracy and style of the translated texts have room for improvement.

Cons: the screen often turns off, design details are not always clear

Your assistant for international communication 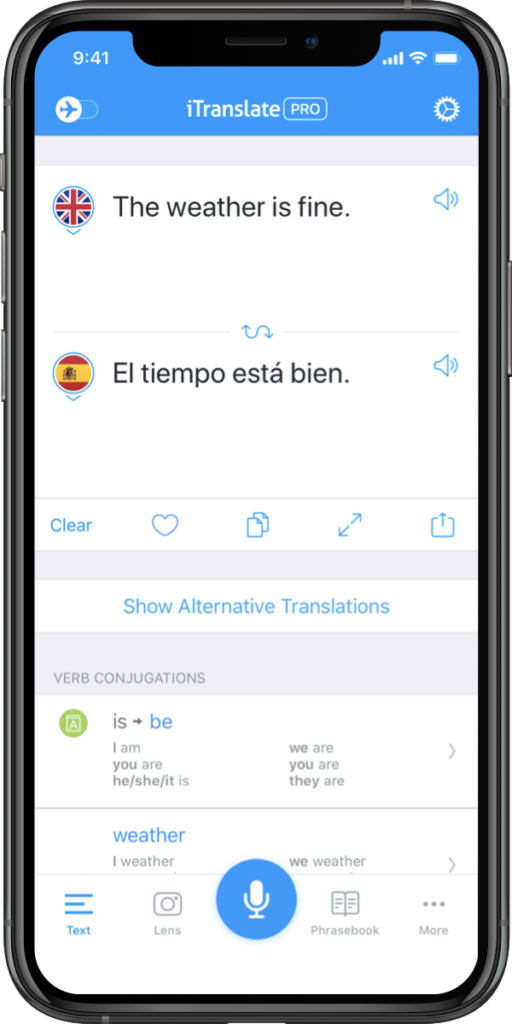 The application is quite easy to use. You say a phrase in one language, the app translates it, and then your interlocutor answers you the same way. However, the high price and translation inaccuracies lower the value of the app. In the free version, you will not be able to translate an image or access an offline translator, although these options are available for free in other apps. Therefore, you should use this app for comparing translations and getting some diversity, not as the main translation tool.

Pros: flashcards, integration with other apps

The quantity and quality of translation apps are at a high level. Modern people have great opportunities for international communication without knowing foreign languages. However, no app can replace a professional translator. Only a real person has enough knowledge to build the most accurate grammatical structure or choose synonyms based on the context.

Palex is a professional translation agency that has been a market leader for over 20 years. We work with more than 80 languages. Our professional translators work with different types of texts, including legal, medical, entertainment, technical, and other documents. Well-established processes and extensive experience allow us to make the highest quality translations indistinguishable from texts written by native speakers. Drop us a line at sales@palexgroup.com. We will be glad to help you with any translation issues.

Why Medical Terminology is Tough, and How to Tackle It?

What are Translation Rates, and How are They Calculated in 2022?

How Do You Create a Request for Proposal for Translation Services to Be Heard?